The Match of the Century: 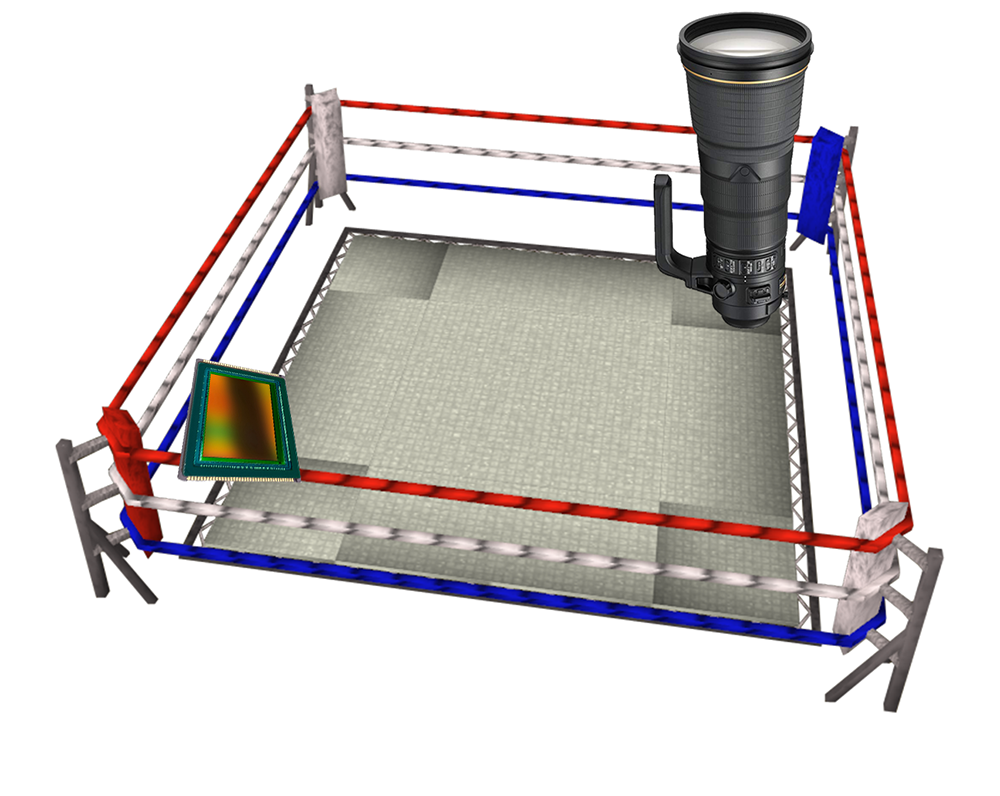 “Ladies and gentlemen, welcome to the main event of the New Photography era. The previous champion – MM – is in one corner. His full name on the street is Sensor Size. He’s a big guy. The challenger – MP – is in the other corner. His name is Lens Resolution. He’s a sharp guy — his density makes up for his size.”

Size replied: “It’s still better to have a longer reach”.

Resolution countered: “It’s better to be more sensitive…it’s all in the brain, not outward appearance”.

But Size came back with a quick one: “It’s better to be close and intimate than watching from a distance”.

This’ll be a Classic. Let’s look at their bios. The biggest mouth isn’t always the best one to follow. Elephant seal, Antarctica

Throughout the history of photographic time (i.e. since the mid 1800s), Size was the reigning champion. Serious photographers used huge 8×10 cameras for studio portraits, lugged them around war zones, dust bowls and all over the world for documentary projects.

Then around the start of the Industrial Revolution in the late 1890s, life in general began picking up speed, and mindsets began to change. People were being more productive in their lives, and began to value speed and portability over professional quality or durability. Kodak invented smaller Brownie and box cameras that appealed to those who wanted snapshots without the need for large reproduction.

Single lens reflex cameras and lenses came on the market for serious and pro shooters as toned-down (pun intended) versions of larger twin-lens and view cameras. Size remained unchallenged, based on his winning market strategy, “bigger is better”, dominating the market for the next 75 years. Super telephoto lenses made wildlife photography much more possible for the masses, and probably a lot safer. And it allowed paparazzi and sports photography to flourish.

Up until the last few decades, it has been a great yo-yo event, every year, watching cameras get bigger, then smaller with higher resolution sensors, while lenses got longer, wider, heavier. But now we are, again, “in the midst of a great civil war”, and a question that plagues every serious shooter: should we abandon our love affair with Size and turn our attention and money towards the first serious challenger, Resolution?

Admittedly, it’s not always a mutually exclusive decision. Each of us has our own qualitative biases and price points. Perspectives can look completely different depending on how much you’re willing to pay for your seats…

Resolution’s biggest strength is in his mid-section. Regardless of whether you have a full-frame camera or super telephoto, you can enlarge the middle and still get a sharp, impressive image, depending on the quality of your sensor. The better cameras with better sensor technology (e.g. more megapixels, 4/3s or other technology) can eliminate the need to spend thousands on a super telephoto lens. Like an eagle eye, sharpness can make up for distance.

There are still limits on how big you can enlarge, but the savings in time, weight and money for the vast majority can be considerable. Then you can (and should) spend more of your money actually getting to those great spots, taking tours, workshops or flights to wherever gets you shooting.

Another strength in Resolution’s corner is increased ability to see details in light and dark areas (dynamic range), ability not to get distracted (moire reduction), fast jabs right where it hurts most (focus speed) and other factors that ride on the coattails of increased sensor quality. These benefits then apply to any image taken with the camera, regardless of the lens used.

In Size’s corner stands a large build, able to see longer distances and discern details even before they reach the “brain”. It is a simpler argument than Resolution’s, but it has some costly advantages. One is that you stand out from the crowd. We seem to admire taller, bigger structures, perhaps from an evolutionary “survival of the fittest” mentality. In the wild, it’s the biggest grizzly that wins the fight. Size and Resolution can both land the big one

In war terms, it stands to reason that if you have the biggest and best on your front line, you’re bound to get the cleanest shot at your enemy. As the first interaction with your subject, a top-of-the-line piece of premium glass will translate that image as directly and sharply as possible to the camera.

IMHO, the debate about noise is more or less a draw. Both fighters have ways to drown out the noise in the arena, especially when there’s a Photoshop referee leveling the playing field in post production.

Two notes are in order here. First, I’m only comparing apples with apples – 35mm sensors with 35mm sensors, full frame with full frame, etc. A medium format sensor has more pixels than a 35mm sensor and would give better quality, so size can help in that sense. But the comparison is unrealistic for most people — a $30,000 medium format camera against a $3,000-6,000 lens? Super heavyweights don’t fight in the same ring as Flyweights.

Second, you won’t see side-by-side comparisons of shots taken with high res cameras vs super long lenses here. This is because it is nearly impossible to accurately compare images on a website (taken with my equipment) vs your shots (even if magnified). All images are reduced to 72 dpi here, where the true comparison is with your own equipment on your own computer with your own eyes. Or right in front of you on your camera screen.

If you don’t have the equipment, find a friend or head over to a camera store and do the comparisons. The point here is to give you with a few facts and a little perspective (pun intended) to test things out in 3D on your computer or printer, without the limitations (i.e. interference?) of the internet.

Once you decide on your personal preferences in an ideal world, the choice comes down to money. Usually when you hear “usage rates”, it’s in reference to what a publication or company will pay for the use of image(s). But that only applies to the minority of photographers selling images. The vast majority of all photographers need to consider the broader implications of usage rates in terms of every equipment purchase. Ask yourself some serious questions:

What percentage of your shooting involves wildlife, sports or other uses that a super long lens would justify?

Is it better to rent a great lens and spend your money on a great DSLR, that will improve all your shots, regardless of lens?

What are the resale values of the choices? (When they’re past their prime (pun intended), can they still pull in top dollar in smaller venues? Which choice will cost you less in the long run if you resell it? Running a quick comparison of used DSLRs vs used telephotos would give you a rough idea how that race to the bottom might shape up. In general, if history is any guide, the top-end, brand name super telephotos tend to hold on to their value more than the constantly updated DSLR cameras.

Admittedly, the time frames for telephoto lens resales have been much longer than DSLR camera resales to make accurate comparisons. And there are a lot more DSLRs on the market than super telephotos. But with serious money on the table, the working life span of any athlete has to be considered, as any manager will admit.

(Though beyond the scope of this article, a related comparison of costs, quality and usage can be made between medium format vs 35mm cameras. The extra resolution in a medium format camera gives extra room to crop and enlarge the center into what could be compared to a 35mm. For a dedicated wildlife photographer, it may not be worth it, but a commercial photographer may have different considerations).

Another consideration is time. Will it take more time in post processing to optimize images taken with smaller telephotos compared to the super-telephotos? Or compared to medium format images? This depends on the final use, in general, but the tradeoff is whether you’re trying to use a 35mm camera to produce the maximum size/quality limit that it’s capable of. All your camera tweaks and post-processing work will be more critical than for an image that will only be seen online. That extra critical nature of the work will take more of your time.

The extra “buffer” of quality or resolution in a more expensive super-telephoto is somewhat similar to the foveal center of a lens, compared to the edges. This is where the highest quality of glass and attention is focused (pun intended). As you shoot with wider apertures or magnifications, quality control blemishes may begin to show up. This may take more time to optimize or correct in post processing. Depending on how long you usually keep your cameras and lenses, the savings in post processing time and labor, if any, may make it easier to justify a higher end piece of equipment.

The assumption, then, is that by shooting with a high-end super telephoto, or larger resolution/format camera, much of the work can be done on the fly while shooting, which may save a lot of time in post. (Key word here is “may”). For that reason, the extra cost of the larger equipment may be partly justified in terms of the “amortized” costs of time saved in post processing compared to smaller lenses or cameras. As you can probably tell by now, it’s not a right/wrong, black-and-white answer. The smartest choice is the best balance for your end use, money and field “carrying capacity” (i.e. your age, body fitness, risk assessment for the particular project, etc.).

Above all, don’t be complacent. Don’t fall in love and let advertising blind you with curved surfaces and sensuous glass. Put on your “impulse filter” and protect yourself with data – compare their stats, plug in your own stats, and test a few punches in the ring yourself with a loaner or rental.

Once you’ve taken a few shots yourself, your own images, intuition and cost accountability will decide the final scorecard.