Ethics in our Nature?

Challenges and Choices for Nature Photographers 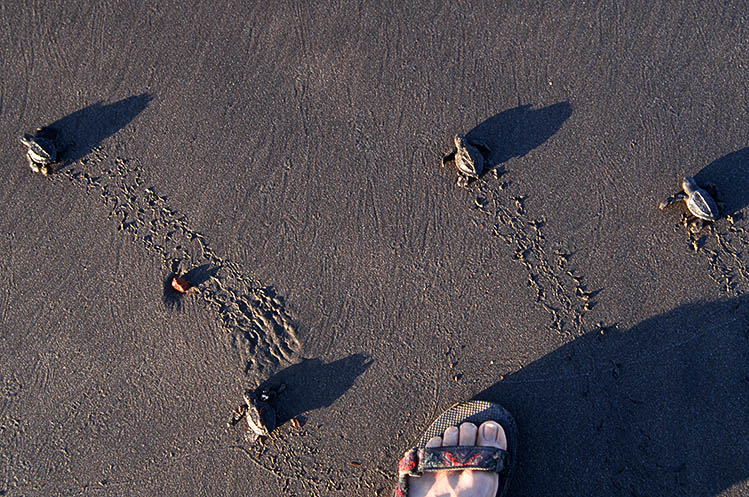 The ethics of photography in wild areas has received a lot of scrutiny in the last 30 years. As a serious nature photographer for almost five decades, I am troubled by the reasons for this increased attention.

Over these last 50 years, wild areas have become more accessible, and cameras have become more compact. Everyone can capture scenes as citizen journalists now in their cities, and beautiful, heart-pounding encounters in our National Parks. Now the masses can experience and create what was once only possible for serious photographers with enough money and heavy equipment. That is the crux of the problem.

The dilemmas, frustrations and transgressions that have accompanied photography ever since it’s invention in the mid-1800s have unique consequences in nature photography. It is hard to imagine any other endeavor where the access and act of recording a scene, while never touching or removing the animal dead or alive, can lead to the subjects’ disappearance on such a pervasive scale.

The irony of loving nature to death is not new, but lately it has a new big brother: global warming. We are chasing a larger dragon’s tail now. It seems more like new outbreaks of the same cancer: population growth, consumption and harmful technologies are increasing too fast for the planet to regenerate and heal itself.

The recent Cornell University study, mentioned in the September issue of Audubon magazine, found that “1 in 4 birds have disappeared in the last 50 years”, most likely due to human interference. Granted this falls under a larger umbrella than just recreation or nature photography, but it is hard to deny the related causal factors.

In terms of recreation, consumptive uses involve those which physically take something from the land (e.g. fishing, hunting) and development of facilities (i.e. “conversion” or justified destruction of forests or other areas to facilitate recreation or appreciation of nature). Non-consumptive uses traditionally have included photographers, hikers and wildlife viewers who don’t “take” anything from the land.

But this arbitrary distinction has proven inaccurate, as both classes of recreational users can cause physical damage to the land or animals. Changes can occur gradually, right before our eyes, yet blind to our consciousness. Subtle non-consumptive impacts can negatively affect natural areas just as seriously as the consumptive idea of removing an animal from its home.

Using our own social dynamics as a barometer, violations of unwritten social norms can have short and long term repercussions. If you were to violate someone’s space, or address them in an aggressive manner, the individual would probably not associate with you in the future, even after just one encounter. Individuals would communicate this to others in their “groups” and if aggressive interactions continue, social adjustments and/or laws may change.

Similarly, our cumulative tangible and intangible violations in natural areas have been bearing diseased fruit for years. National Parks and other wild areas have documented short and long term displacements in wildlife migrations and behaviors. This has led to increased law enforcement, tighter restrictions and sometimes closures in our most beautiful and popular photo destinations.

A 2016 NCBI meta-study of 274 articles documenting the effects on wildlife from 18 types of non-consumptive recreation included two interesting conclusions: 1)“Non-motorized and winter terrestrial activities had notable evidence for negative effects.”, and 2) “Most (59%) of the effects of recreation on animals documented in the reviewed articles were negative effects.”

Like paparazzi photographers, whether alone or in groups, nature photographers can cross the line for a great shot. Without noticing any “violation”, they may change an animals’ habits by continue to shoot until the animal leaves, becomes “unphotographable”, or until access or weather interferes.

Subsequently, if the image(s) taken have received praise in publication or exhibit, more photographers are motivated to try for the same shot in the same area(s), affecting the threshold of animal tolerance in one way or another. Small ethical transgressions like these can mushroom to larger, more frequent transgressions by the masses. The lure of recognition or money tempts even the best in the heat of the moment to push moral limits. (See Professor Peter Singer’s insightful “Ethics in the Real World“ on how we stretch rationalization).

There have also been numerous instances of photographers staging natural situations to produce a photo or video for sale editorially, as fine art, or for photo contests. Staging is an overt act of manipulation that has many shades of impact. It may involve an animal that doesn’t seem to care or show any obvious signs of behavior change. It may change an animal’s routine temporarily, with or without any effect on its survival or population dynamics.

Regardless of our perception of impact, there is a common thread. In passing off an artificially staged scene as natural, without admitting the deception, there is an element of hope in the process: first, that the staged action mirrors exactly what would happen in the wild, and second, that nobody discovers the forgery.

An experienced photographer, naturalist or photo editor can tell when an image shows an animal that is visibly distressed, or otherwise doing something unnatural. This can clue the editor or viewer into the possibility that the photographer may have ignorantly or arrogantly modified the scene.

Some photo contests have nullified a winner’s award and recognition when they discovered a violation of ethical rules by modifying a scene (staging) or representing a captive animal as wild. Aside from penalizing the photographer, the penalty to the animal or ecosystem is less visible and harder to document. Similarly, the damage to the integrity of the profession is equally hard to quantify.

But even when photographers are aware of their possible impact, ethical dilemmas are hard to resolve in the field. In the January, 2014 National Geographic article Don’t Feed the Bears: Ethics in Wildlife Photography and Filmmaking, filmmaker Jeff Hogan discusses the decisions involved in shooting inside and outside a beaver den:

“The clients didn’t like the look of the lodge’s exterior; it was ugly and wanted to find a new one. My thought was, to avoid bothering another family of beavers, let’s shoot two lodges, one inside and one out, and let viewers assume it was the same location. The clients disagreed. They were concerned about being ethical to the audience; I was more worried about the animals”.

(In my opinion, this is not a mutually exclusive decision. They could have photographed both lodges and notified readers with a disclaimer, stating their concern for the welfare of the beavers).

So it becomes an ongoing, recursive challenge for all of us to fine tune our sensitivities and adjust our habits before, during and after our encounters. And this should apply to all animals, not just the ones we photograph — big or small, predator or prey, “cute” (e.g. big eyes or human-like) or “ugly”, useful to man or not.

(See the insightful article Does a Bear Think in the Woods, describing the work of Bill Kilham and Jennifer Vonk on bear intelligence, self-awareness, and reciprocal altruism…”Compassion isn’t contingent on intelligence”, Sierra magazine, March 2019).

How to Shoot with Minimal Impact and Guilt

Aside from the unresolved ecological consequences, the good news for photographers is that the increasing popularity and impact on the land has set in motion forces to uphold the integrity of the profession, provide a consistency of behavior, and protect areas that inspire us. (The ecological moral issue remains how to protect areas that don’t inspire us).

In addition to the general codes of ethics in the larger photo associations such as ASMP, NPPA and PPofA, two of the more prominent nature-focused groups in the US — the International League of Conservation Photographers (iLCP) and the North American Nature Photographers Association (NANPA) — promote more targeted codes. They emphasize being aware of your actions and those of the animal, and minimizing disturbance by how and where you walk, talk, act and use your equipment.

They can be accessed here:   ILCP    NANPA

Alaska Photo Adventures adheres to a synthesis of their Codes:

1) Learn about the area and animals you are photographing. Be aware and respectful in the field; this will enhance the sustainability of wildlife populations, important natural areas and the nature photography profession.

2) The welfare of the subject is more important than a photograph. It is not a zero sum game in which a successful photo can only be gained by violating the natural rights of an animal to live free without fear, distress or hindrance. Use the golden rule to guide your actions. Exist within the land, not in control of it.

3) Minimize disturbance to the area you are in as much as possible to preserve the same character that attracted you there in the first place. Tread lightly, pack it in, then pack it out.

4) Integrity extends to post production. Do not manipulate images to deceive or misrepresent natural events. Caption honestly and accurately. Indicate when animals are captive, or ecosystems are man-made or otherwise not wild.

Rather than a physical confrontation — a “transaction” where one side pays a price and the other side gets a benefit — wildlife photography should be more of a quiet conversation. Like most conversations, we should listen more than we talk. As with people, we should be more aware of our non-verbals. But animals also have heightened senses that we are often unaware of. They can see, hear and smell miles better than we can, depending on the animal. They can sense our presence long before we see them, and long after we leave.

Back in the 1940s, Aldo Leopold, one of the founding fathers of conservation in this country, inspired us to think ethically with a general concept to keep in mind toward the natural world: “A thing is right when it tends to preserve the integrity, stability and beauty of the biotic community.”

It is as simple a concept as it is elegant, but some individuals, special interests and policy makers still have trouble following its sound, healthy advice. The consciousness of our impact as photographers seems to be gaining traction. But is it too late, before we unnecessarily lose more wildlife, land and opportunities for enlightenment? Can these ideals be adopted by the masses, generalizing across all strata — general recreational users, non-photographer animal lovers, children, and perhaps, in some form, consumptive users? All of us have room to minimize our impact.

We need to balance our own goals with those of our wild subjects, our self with our larger community, and our desire to capture the moment with the possible loss of it in the future. 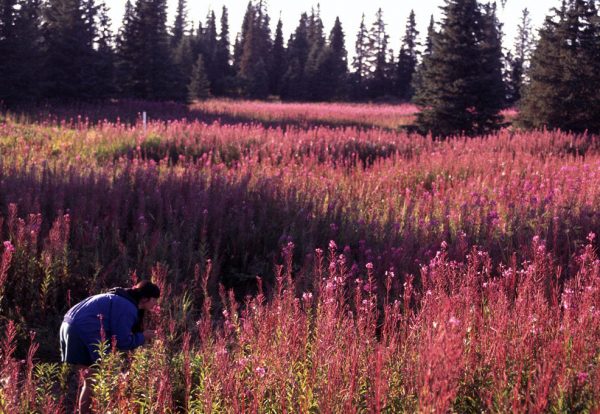 On my desk, I keep a short poem entitled “For the Children” by Gary Snyder, the Zen poet. It’s there mostly as a compass, to remind me how to raise my children, and where we are headed. But I also find it relevant for all photographers and lovers of nature, as a perspective on the motivations behind our quest for images:

The rising hills, the slopes,

of statistics lie before us,

of everything, going up,

In the next century

or the one beyond that,

we can meet there in peace

if we make it.

To climb these coming crests

one word to you, to

you and your children: 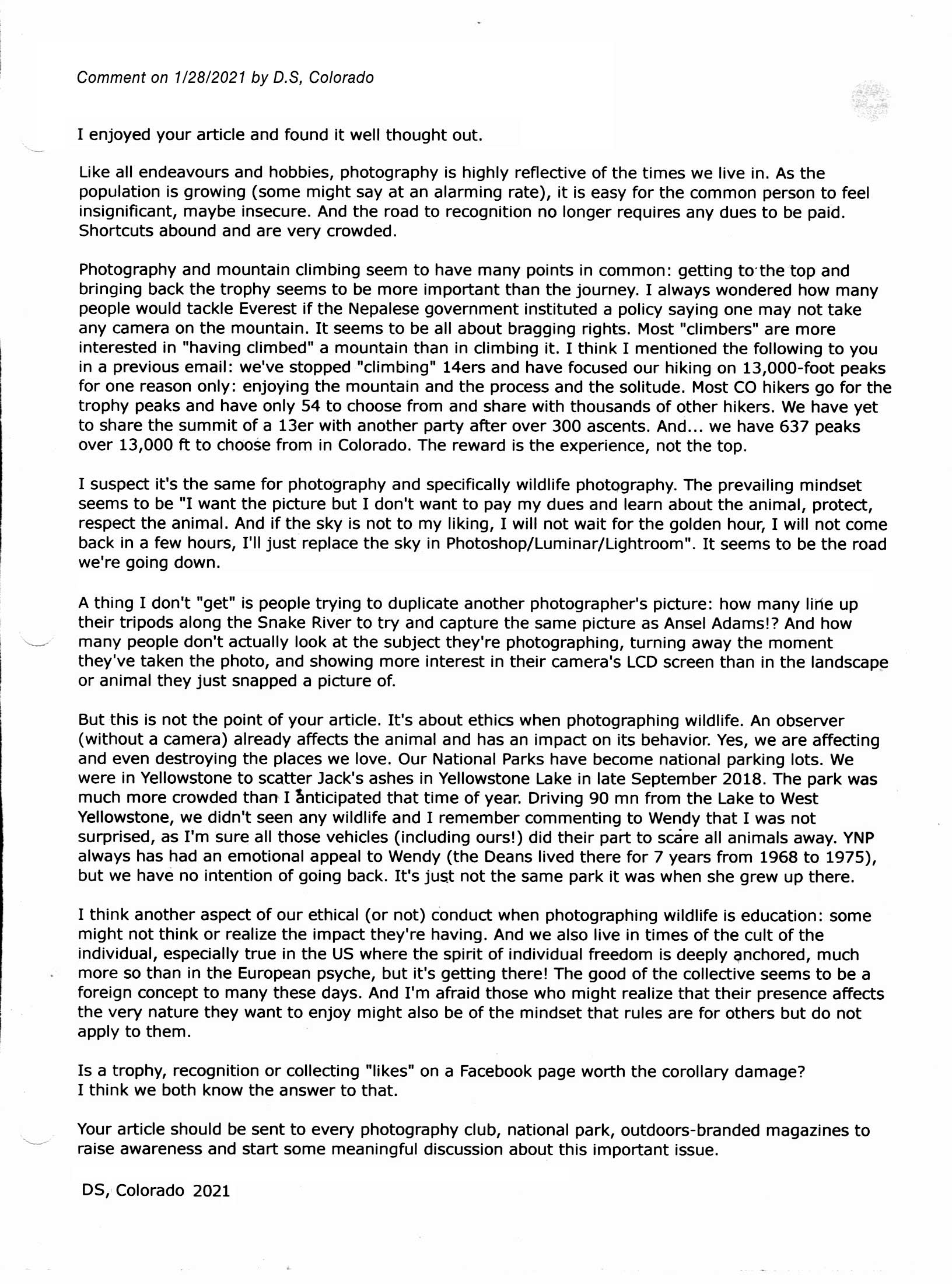