Unexpected bonds that formed from saving wildlife in Ecuador 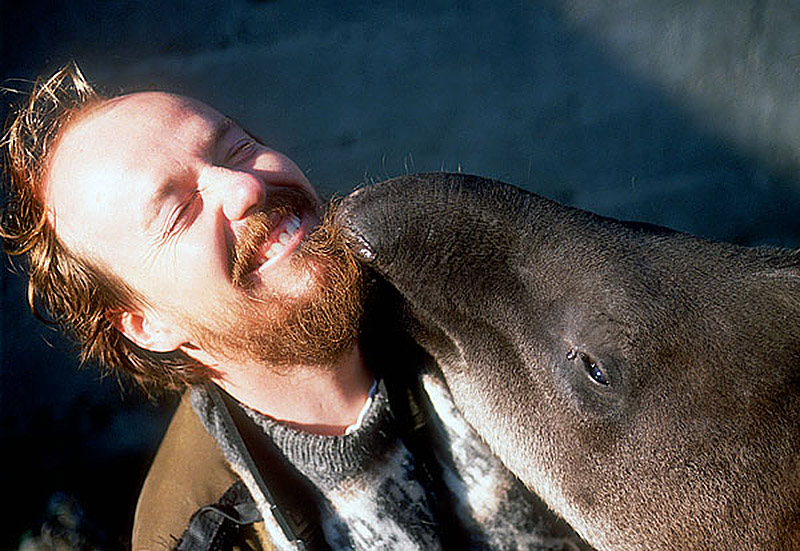 A tapir greets a visitor to San Martin Zoo

Orlando Vega, the gentle-minded owner of the San Martin Zoo in Banos, is showing the world that it doesn’t take corporate finances or governmental connections to imspire others to care about the beings sharing our planet with us.

The private five-acre complex is located high in the mountains about four hours south of the capital city, Quito. Developed amidst contradictory social values and government apathy, the zoo has numerous endangered animals such as jaguars, pumas, bears capybaras, ocelots, and hundreds of birds like parrots, hawks, condors, and toucans.

From the Amazon forests in the east to the hot, humid hills and plains of the west, Orlando knows Ecuador intimately. He also knows where the world is headed and what has already been lost. At a time when rainforest destruction is welcomed by most Ecuadoreans with the promise of improveda transportation and standards of living, Orlando is hanging on to his childhood memories.

Speaking in broken English and well-schooled Spanish, he tells of times in his youth when hummingbirds were everywhere, where condors soared faithfully overhead and nobody knew the word “extinction”. He tells of the increased poaching of jaguars and pumas for their skins, and of the ignorance, which continues the indiscriminate shooting of owls and birds of prey for un. He talks of social and governmental support for projects that bring money and necessary services to villages and cities, but the lack of time and effort spent educating people about the losses that occur in the natural world as a result.

Like everyone on the planet, Ecuadoreans want to improve their lives. If you understand that a family in need of food or housing has little desire to save a tree in the rainforest, you being to appreciate the gains Orlando has already made and the hurdles he has yet to overcome.

The San Martin Zoo is a place where visitors are beginning to understand the same message that other zoos have been expounding for years – here are many animals you may never see again in your life. They also begin to see how one animal’s extinction stems from the same attitudes and lack of care that are producing other global problems. 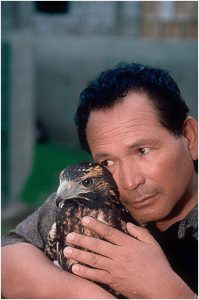 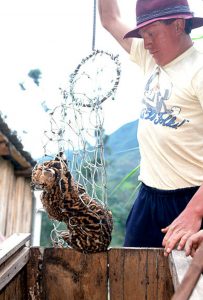 Transporting an ocelot to a larger enclosure

The zoo has tapirs that roam free – you can walk up to one and, if you’re lucky, receive a wet greeting kiss on the cheek. And many of the cages were designed around the natural rock walls in the area, so minimal fencing was needed. Orlando has carved this zoo out of a desire to allow others to experience what has given him strength and confidence in life – direct interactions with animals. These interactions, he says, show us how to communicate non-verbally, how to respect the needs of others different from us, and, ultimately, how to care for others.

A prime example of the success of his efforts is “Superman”, a hawk-eagle he found over a year ago almost dead from the bullet of a prankster. After nurturing the eagle back to health for several months, Orlando returned it to the wild. Superman continues to visit the zoo every few days, waiting for some food and company. Orlando feeds his friend by hand, nurturing this special bond and maintaining a connection with the wild land of his roots. Visitors can pet the eagle and other animals as he brings them out to feed. Superman hangs around long after the food is finished, sometimes for hours, just observing Orlando and zoo operations in general. These bonds are strong and began well into the animal’s adult life, after any possibility of imprinting had passed.

The bonds are not just between humans and animals. At the same time that Superman was being rehabilitated, a small vervet monkey was found orphaned near the zoo. Orlando decided to care for the monkey until he figured out what to do with it later. Since the eagle was originally too weak to fly or hunt, and space was tight at the zoo, he decided to house both animals in the same huge pen. He gradually noticed that although the monkey was understandably afraid of the eagle, Superman was not interested in the monkey at all.

The two natural enemies became friends. Superman began to tolerate the monkey’s high-strung activities and constant need for tactual reassurance like a big brother. The monkey’s pace of activity and general excitement often subside when he is closer to the eagle. Even more remarkably, the monkey often lies down near the eagle’s talons to rest. Superman gently places one talon on its head, and within seconds the monkey is fast asleep. 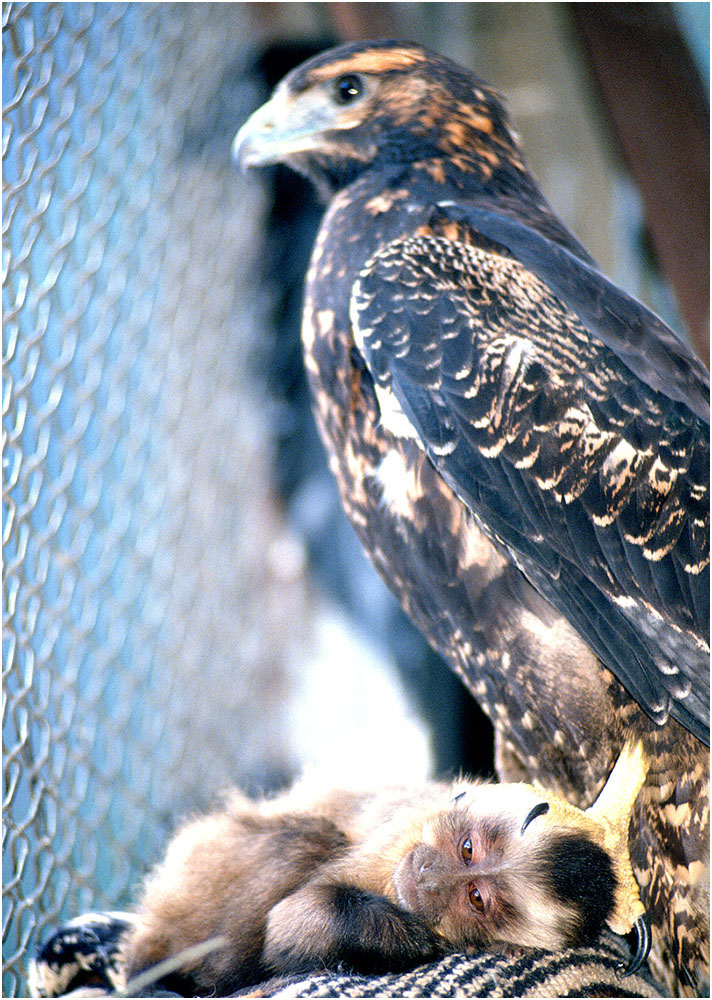 Baby vervet monkey resting under the talons of a hawk-eagle. Enemies in the wild, friends in rehab.

In a country where daily physical needs are pressing issues, many still don’t fully understand the value of Orlando’s zoo. They see it as an entertainment, a luxury and something quite apart from their lives, rather than as a source of protection for endangered animals and a powerful educational tool.

The image of these two friends has been exhibited and published internationally. In discussing their unique relationship at luncheons, schools and galleries, people begin to recognize some of the presumptions and biases that can sometimes be so detrimental to our survival. For instance, if natural enemies like these can get along  so well, maybe we can learn to interact better with people and animals we used to think were different from us. If hatred is not genetic, perhaps kindness and cooperation are the natural defaults for all species.

Along with the other animals tucked away in this enclave of hope for Ecuador, these unlikely partners are living ambassadors helping us to better understand, protect and improve our world.

Ron Levy’s images have been published internationally for over 3 decades, including exhibitions in museums and galleries in the US, Europe and Asia. He has been a photography instructor at the University of Alaska, and provides assistance to agencies and NGOs specializing in health and conservation issues worldwide. He has also guided hundreds of travelers on nature, photo and historical excursions in Alaska, California, Arizona and Ecuador over the last 35 years.